Aimee Doherty: The Toast of Mayfair (and Boston)! 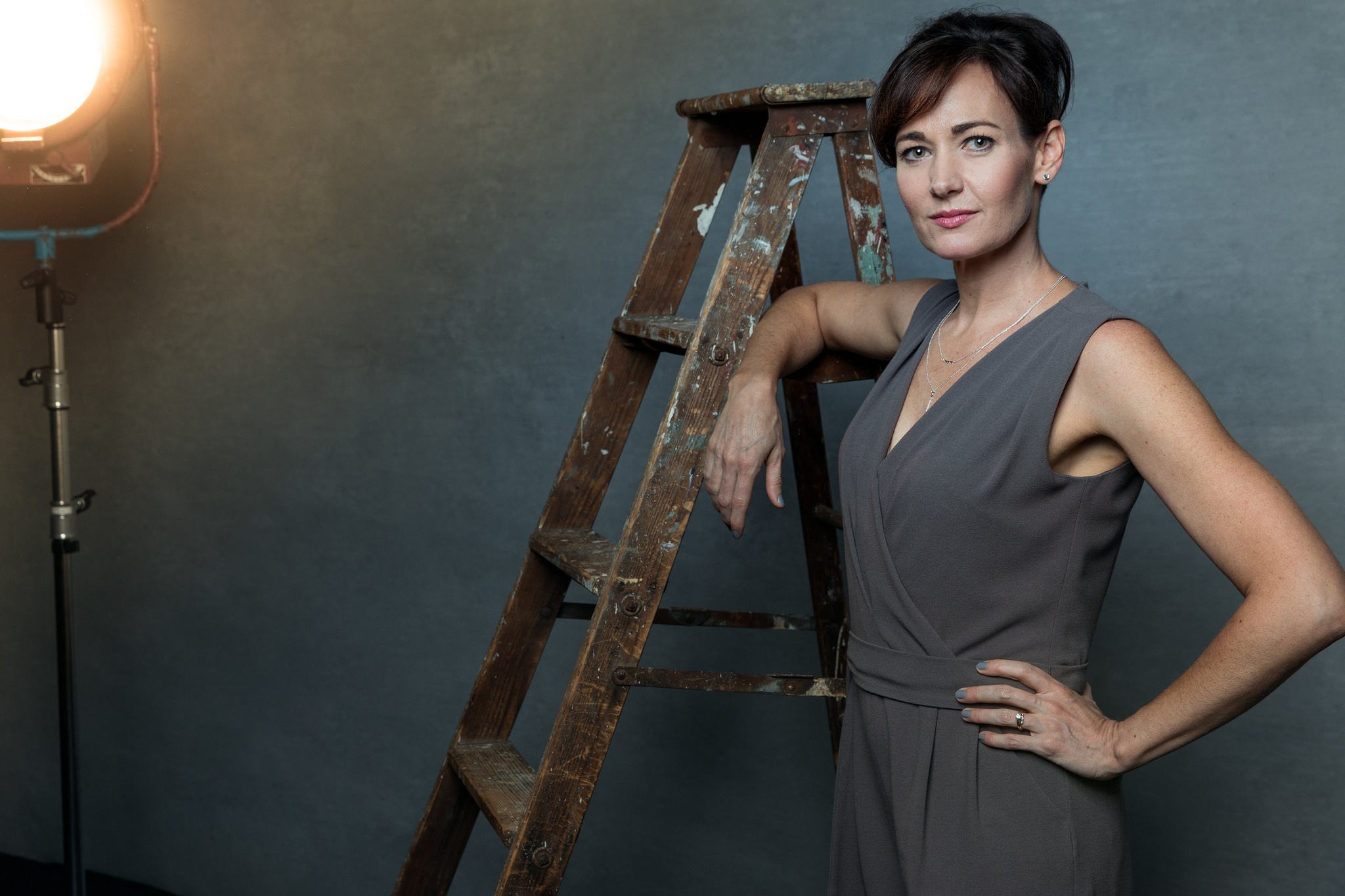 Known for her excellent work with nearly every theater company in town, Aimee Doherty is currently taking center stage in her fifth (!) turn as Sally Bowles in Cabaret. In between shows on a two-show Saturday, she sat down with me to talk Sally (the character and the dog), being very excited in a garden center, her Rent the Runway habit, and her upcoming Boston Pops debut.

Aimee Doherty: Just don't make me sound dumb. Edit out all the swearing.

Kyle Thomas Hemingway: "The Actress Aimee Doherty!" Can we start with that story really quickly? I love that story so much.

AD: I walked into this Stop & Shop in Wrentham, Massachusetts, and these two ladies fanned out on me and were like “Are you—I’m so sorry, I’m so sorry—are you the actress Aimee Doherty?” and I was like “Yes! I am!” [laughs]

KTH: That’s magic, you’ve made it!

AD: I have, I have been recognized in a Stop & Shop in Wrentham by a couple of middle-aged white ladies.

KTH: Speaking of making it, I was catching up on The Real Housewives of New York City this morning and there was someone I recognized in a New England Honda Dealers commercial!

AD: I haven’t seen it because I can’t bear to see myself on video!

AD: I have to imagine it is, because we were going through this lawn and garden place and they kept telling me to pick up a plant and be like “Wow, this is the plant I need! Bigger. Bigger!” and I was thinking “Oh my God, I’m going to have an aneurysm over this plant!” because they kept shouting at me “Bigger! Bigger!” And people are going to see this and they’re going to be like, "Doherty! Why are you acting a fool?"

KTH: I thought it was genius kind of marketing—the concept behind it.

AD: Yeah, earlier that day we were mic'd up and I’m sitting in the car with the guy who’s playing my husband and we were talking about—because it’s a very cold day—that earlier in the day this younger onscreen couple had to shoot on the beach in shorts, it was probably less than 20 degrees! Horrible! They were just barefoot and on the beach.

So I’m in the privacy of this car, forgetting that I’m mic'd, and I’m just going, “Those poor assholes out there on that beach.” and the sound guy books it from across the parking lot and he is like, “You’re mic'd and the clients are listening!” So I don’t think I’m going to book another Honda commercial, even though I was just being sympathetic to them!

AD: This is my fifth time playing Sally Bowles.

AD: This is, I think, the last time. But who knows, I might do it again in a nursing home somewhere years from now. I did three community theater productions of it and actually—fun fact—our drummer for this production played my Cliff in the second one that I did, at Fiddlehead. He was very good! Ten years ago I did the production at New Rep, and now this!

KTH: You must know her pretty well by now.

AD: Yeah, though this is a different script. We have the Donmar Warehouse script, which I think is the best script.

KTH: And this is the first time you've done that script, yes?

KTH: How is that making the show different for you?

AD: The script is just better. It ratchets up the desperation, I think. The audience understands that Sally's in pretty dire straits. For me, I think it’s also being older. When I was a younger actress, I was afraid to be ugly on stage, to be greedy, to be selfish. I just felt like somehow that was a reflection on me. As I age, it’s not that I don’t care, I just realize that that’s what makes somebody interesting. You don’t want to go see a play that’s about some well-adjusted person on their best day. You want to go see a play about some shit-show on the worst day of their life. That’s exciting, that’s riveting. It’s the fight to not fall apart. It’s the clawing, the struggle. I think I realize that more now and, I'm okay with letting people see the less-nice characteristics of the character.

KTH: What’s your favorite thing about this production that you’re doing now?

AD: There’s a bunch. I don’t want to give away the ending, but the ending is beautiful. I really like Jared Troilo as Cliff. A lot of times, Cliffs are all-American types: handsome, Captain America-looking, kind of bland guys. Jared is a sexy guy and there’s an intensity about him that he brings to all of his parts. He has to put a cap on it for Cliff, but it’s always simmering, and I think that that just makes the character so much more interesting. Also, back to the script—Cliff is basically a closeted homosexual—previously, it was only very briefly alluded to, and you kind of forgot about it, but in this script you can see that he’s just struggling and he can’t be who he really is. That’s frustrating and gives him a struggle and makes him a little more dangerous instead of all of these straight people living happily ever after. It’s a very unusual relationship.

KTH: You love Sally Bowles so much, even your dog is named after her!

AD: Yeah, I love the name. You just say Sally Bowles and everybody knows the character. She's a three-legged puggle and she just looks annoyed at everybody. She has the bossy pug-face, it was just perfect for her.

AD: Sally Bowles is like Sally Bowles because she’s the biggest personality in the room. She just bosses everybody around. She tells Jeff [Aimee's husband] when it’s time to go to bed, and she sits on his face when it’s time to get up. I feel like that’s a very Sally Bowles thing to do. When ten o’clock rolls around, I don’t know how she tells time, but she gets up and she just stares at him with her three legs, and she doesn’t have great balance so she has to hop a little, which is hilarious, until he goes to bed. At six in the morning (she sleeps with us) she just walks up to him and sits on his face when it’s time to get up.

KTH: So she’s the clock in your house, I love it! Similarly, how is Aimee like Sally?

AD: I don’t know. I think she has an exceptionally low opinion of herself, and at various points in my life, I have struggled with my self-esteem. I’m in a great place now, but I can remember those dark days. I usually find myself playing more sophisticated women—almost the "smartest person in the room who's just over everybody and who's surrounded by idiots" type of person—and that’s super easy for me. With Sally, she’s a bit more of a mess and a bit more scattered. I don’t play characters like that very often, and that’s what I like about doing this. She’s not a super ambitious, whip-smart woman. She doesn't know what the fuck she's doing. She directionless. She’s just trying to survive. 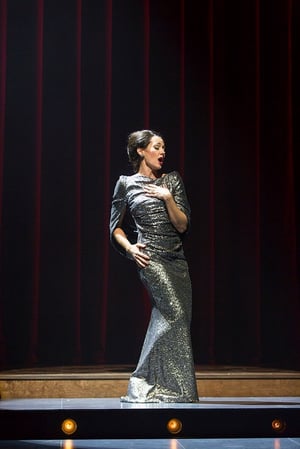 KTH: Speaking of whip-smart women surrounded by idiots: Congratulations on your Elliot Norton nomination for Gussie Carnegie in Merrily We Roll Along at the Huntington! That was an incredible production, I saw it twice. Most importantly, though: Did you get to keep the dress [pictured at right]?

KTH: What was it like getting to wear that dress and make that entrance?

AD: It was amazing and horrifying at the same time! During tech week, we teched that scene at the end of a 12-hour day, and so I’d been in heels all day long. Everyone was just exhausted and it was almost midnight, and they were lighting me. They had to hold for something and so I sat on the steps onstage, and I heard this collective gasp of ten people as they ran up to me. “Do you understand that the dress you are wearing (I can't remember, I'm sure I'm inflating the amount) costs, like, $15,000?!” So I stood up immediately and never sat down in it again. It was lucky that I could put it on at intermission, walk onstage, and then immediately take it off after. Two minutes before intermission was over, I would put that dress on because I didn’t even like to breathe in that dress. But it was beautiful, it was really beautiful.

KTH: Well, you looked great in it! Looking ahead, you're debuting with the Boston Pops this summer. Are you super excited?

AD: I’m super excited! Can you even imagine singing with the Pops? Standing on that stage! I just don’t even know what is going to happen to my body, I can’t even imagine. I look at pictures occasionally, but then I have to stop because it makes me too nervous! I’m really excited about it, I have three solo songs and they’re great songs and then I’m singing the quartet from West Side Story. It’s going to be awesome!

KTH: Have you ever sung with a full orchestra like that before?

AD: No! Well, I actually did On the Twentieth Century, and that was a beautiful production with Overture Productions. This is going to be a little bit different though, that time I was, like, "Fourth Lady in a Hat," this will be amazing.

KTH: Have you chosen what you're going to wear?

AD: I think I might actually buy something for this one!

KTH: Well, I'm around whenever you want to go shopping and get cocktails! Thanks for spending your afternoon between shows with me! Go eat whatever delicious salad is in that box and sing pretty tonight at your show!

AD: It's actually mac and cheese. With bacon.

KTH: You heard it here first, kids! Sally Bowles eats mac and cheese with bacon at the Kit Kat Klub!