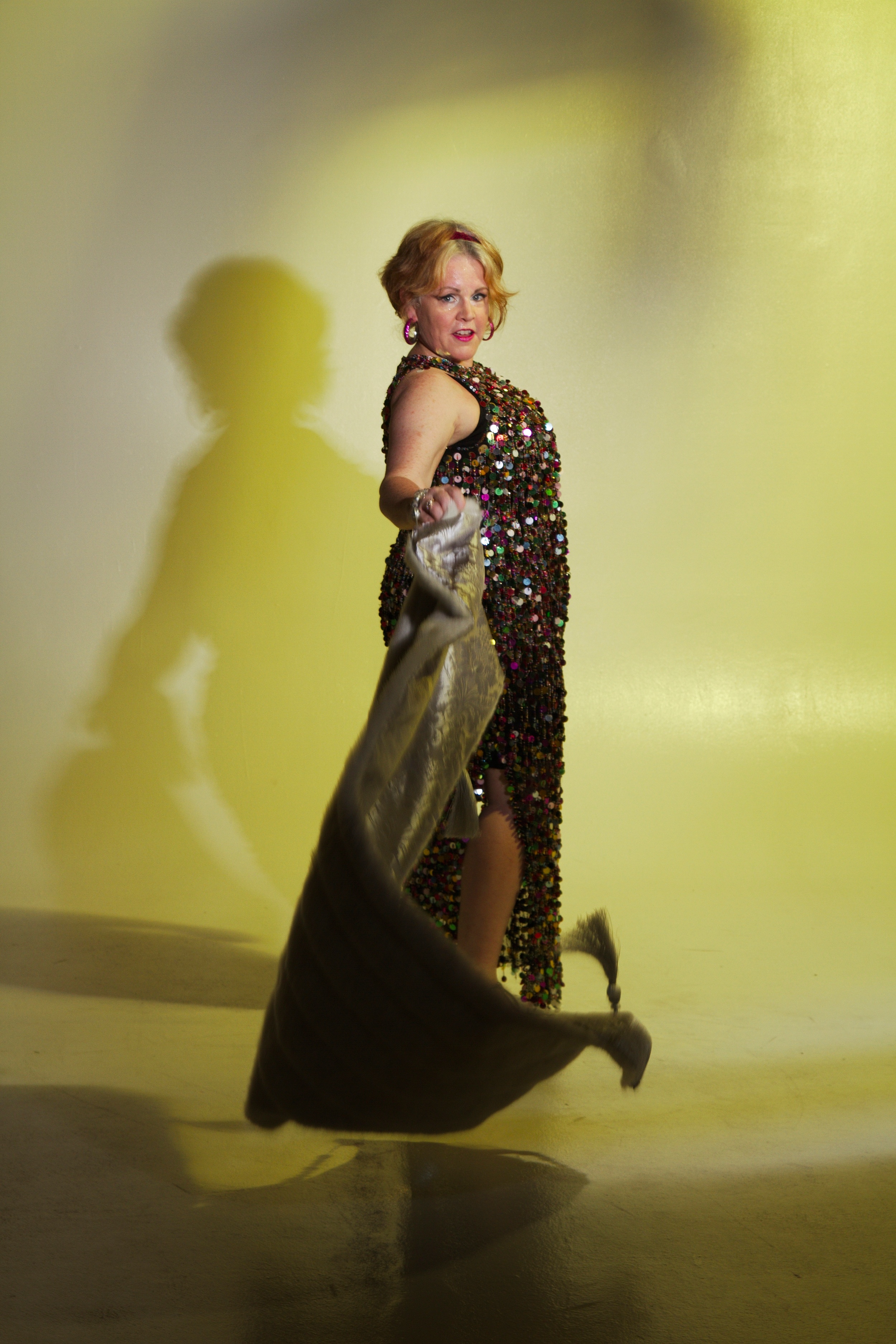 This week I had the chance to interview Amy Smith, founder of Belly Dance New England and member of the Origins Folkloric Dance Company. Amy has been researching Boston’s rich history of belly dance and how borders do not equal disparate cultures.

How did you get into belly dancing?

I started belly dancing when I was 34 or 35. In the early 90's, I went to a women's event that had belly dancers and I said to my friend, "Oh, that looks fun, maybe I should try that!" and coincidentally my friend was taking belly dancing classes already and invited me along! That's how it all started! I had done limited ballet when I was a little girl, but that's it. I was not a performer, and I certainly was not a dancer.

How did you transition from starting belly dancing as a hobby to founding Belly Dance New England?


It creeps upon you! I think this is addictive for many women, from the start I loved it. It was something I could do-- It didn’t require the athleticism of ballet or modern dance, and these are moves that suited my body, I could actually feel like I was getting it right away. Obviously, there were some struggles but it was something that I could rock right away and the moves didn’t feel uncomfortable or strange on my body-- I’ve always been very curvaceous. The belly dancing classes were wonderful, there was always a sense of camaraderie and so right away for me it was a lot of fun. When I walked into that first class, I never imagined that I would be teaching or performing. You get addicted, you go to classes, then you go to more classes. Our teacher had a recital and she has us work on our costumes, and of course there’s bling so you get into the bling and that’s super fun to wear! It escalates very easily!

Several members of my class and I formed in the late 90’s, a little troupe of students and we performed at fairs and outdoor festivals and it was around 1995, I think, and one of our great Middle-Eastern belly dance musicians, George Abdo was having a birthday party so our troupe performed that night for him and we did choreography to one of his songs. That same night, at the other end of the state a really big name dancer from New York was giving a workshop and show and neither end of the state knew what was going on at the other end. This was in the mid 90’s and I was a professional tech writer for many years and I thought, well something has to change so I started a newsletter called Middle Eastern Dance of New England and listed events, teachers, and classes and it was maybe originally six pages but then over the years it grew to be a magazine, Belly Dance New England. The website was a part of it, but for a long time it was a publication and I charged for it and did the website on my own but then in the mid 2000’s I moved the magazine online.

Yeah that was my goal, I wanted to create a sort of portal for belly dancing.

What goes into a belly dancing show? Is it choreographed or improvised?

In belly dance’s true form, you’re not watching choreography, you’re watching improvisation so when you see a dance, it’s one-of-its-kind. Back in the day, in the 50’s and 60's in the heyday of belly dancing, dancers would dance to live music and with live music, you never know quite what the band is going to play so skills that belly dancers were taught was the ability to improvise. You learn rhythms and music, and how to adapt and recognize them and you have an idea of how to dance to them. In the east coast, we had a performance structure called The Five Part Routine which was a performance construct that was a structured routine and it had an Opening, a Veil Piece, a Taksim, a Drum Solo, and then a Closing. This Five Part Routine gave you a format that you could understand and structure your performance to. When I say improvisation, I mean structured improvisation, like jazz.

Sadly nowadays there’s much less live music so I do a lot of performance to CD but the roots of the dance were to improvisation. You’re really creating in the moment with the band because you never know what’s going to happen. When I first started taking belly dance and learned that’s what happened, it scared the crap out of me but then the first time you do it, it’s addictive. There’s nothing like dancing with live music and your training supports that. It’s not as if you're just thrown out into the maelstrom! Belly dancers training supports that. Musicians really want to work with you, it’s really a collaboration.


What is belly dancing a mixture of?

Belly dancing is a set of moves. The moves that we learn in America come from everywhere. The belly dance truly probably has its roots in North Africa and it is an outcropping of folk-dance. Belly dancing is really based on the folk dancing of those regions. There’s really no belly dancing in Armenia or Greece before the Ottoman Invasion, but when the Armenians came here   to Boston and when the Greeks came here and the Syrians, before the Civil War in the 60’s, they were lonely for their homelands and they got together and played their music. What happened here in Boston was very unique, because Boston was so much smaller but you had these immigrant communities come together because they have shared food and geographical and political strife and a lot of their music was similar in terms of rhythms, and so they came together and they learned each others music and created this melting pot. That’s really the origin of the Boston belly dancing scene and it was very unique. The Armenians brought the Turkish repertoire, the Arabs had their music and the Greeks had their music and that was magical.
Then in 1952, the magic happened. The first Middle Eastern club with live entertainment opened in Boston, it was called Club Zara.

Tell me about Aziza!

Yeah, so we’re working on a documentary! In the early 2000’s, for my tenth anniversary of Belly Dance New England, I wanted to do something really special. A lot of the belly dance teachers came up in that nightclub era of the 1950s and I felt like I’d missed out on something big. I wanted to honor Boston’s belly dance history and legacy so I met this photographer, Michael Baxter and interviewed him for my magazine. He had this appreciation for dance that was just overwhelming and amazing so I approached him about a collaboration of photographing the legends of Boston belly dance. For several years, we put together these amazing photo shoots and I wasn’t sure what I would do with it but I just wanted to capture these people, I mean none of us are getting any younger!

In the middle of all of this, I got a call from a friend who mentioned that I should do a documentary and I was like “Yeah, yeah, yeah, whatever, I’m up to my neck with these photoshoots and learning on the job about producing photoshoots!” but then a few days later, I got another call from another dancer and she was like, “I heard you’re doing a documentary!” So I was like, “Okay, I guess this is a sign!” That’s how this started! My friend was also a journalist by training and she was working with a local documentary company on another documentary and we started doing a lot of work and now we do have a sampler, which is used for funding pitches. We tried our best but the project went dormant for several years. Last year, I semi-retired and had a little more time on my hands so I took a class on the History of Belly Dance with a wonderful dancer in Vermont named Amity Alize and her approach is the whole world; she teaches Egypt and Turkey and Lebanon, but she also has an American section and we had a project for this class and so I thought to revise my research. I gave a presentation on my research and about how pivotal Boston was, and I got the bug again and reconnected with my producing partner and now I'm pursuing the history part in a separate story. The history has to be done because people are starting to die, I feel like I have a fire under me. I don’t know what the end result will look like but I’m very excited about it.


What the most surprising thing you've learned?

A couple things that weren’t so much surprising but interesting: What happens here in Boston and New York is something uniquely American and when you see a dancer performing, that’s not how belly dance was originally performed in Egypt or anywhere else, it was really shaped by these musicians coming together and sharing their repertoire and dancers sharing their own experiences with each other. There’s an ethno-musicologist, Anne Rasmussen who wrote her PhD thesis on the Arab-American musicians, and a lot of her research was done in Boston in the mid-to-late 80’s about how what was happening in the club was really a creation of the time. What came out of all that was something uniquely American. There’s a style called American Tribal Style that came out of California and some people claim that it’s not Middle-Eastern, but it’s based on Middle-Eastern dance and it’s something that’s uniquely American. Art evolves. Art changes. Jazz and tap come from dances that the slaves brought over. Jazz comes from that music! There are many belly dance purists and there’s nothing wrong with that because we need people to remember how things were, but I think it’s kind of exciting that America put its own stamp on this art form in many ways.

Belly dance was originally done in the restaurants and the streets, it was a dance of the people. It’s a good historical document, but it remains stagnant. I feel like personally, I think people need to relax a little bit. You asked what was surprising but I feel like what happened here and in New York has helped belly dancers shape their craft. This melting pot is really only something that could have happened here in America.


What do you think is the most common misconception people have of belly dancing?