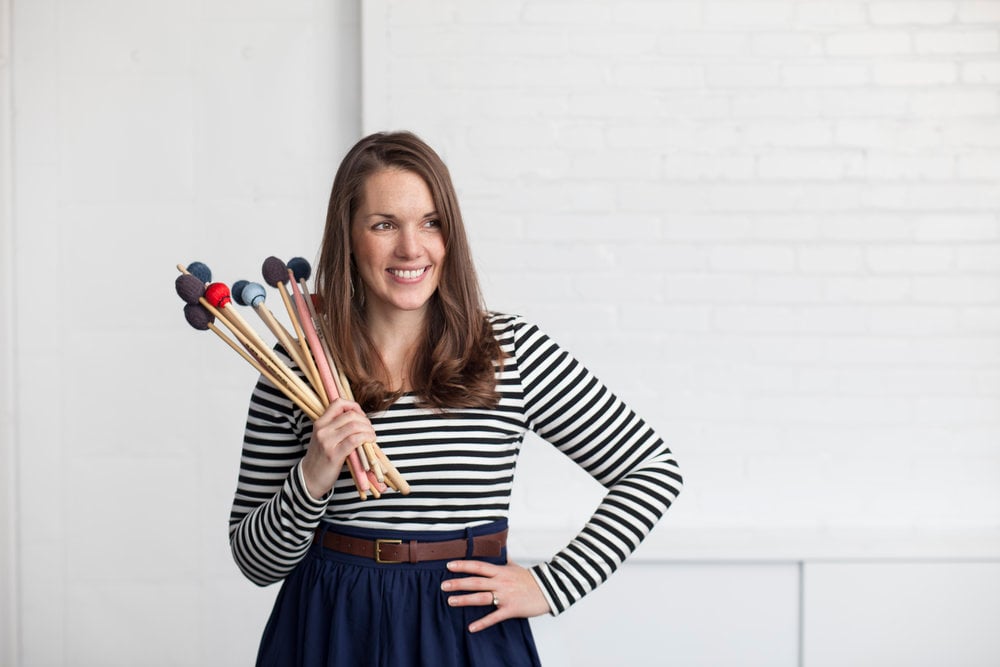 Maria Finkelmeier is a powerhouse percussionist, educator, composer, and innovator based in Boston whose travels have taken her from Ohio to the northern woods of Sweden. Some of you may be familiar with Maria through her work as the founder of Kadence Arts or as a driving force behind Masary Studios.

This Tuesday, Maria will be performing her live installation #improvadayLive! with March Marimba Madness and we were lucky to catch up with her to talk about everything from her experiences living in Piteå, Sweden to turning Fenway's Green Monster into a giant percussion instrument! 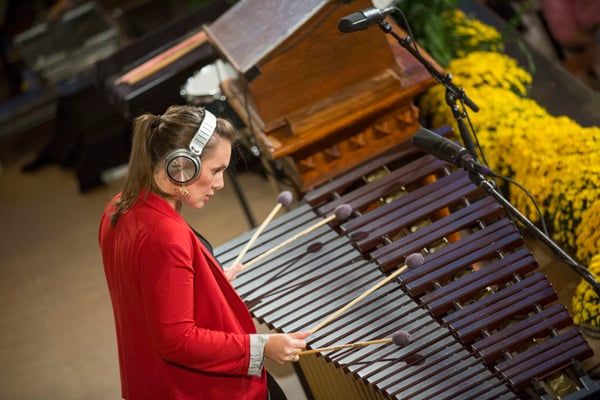 First of all, what exactly is a marimba and what does it sound like?
The marimba is a mallet instrument which is just a general term for any melodic instrument in the percussion family that’s set up like a piano. Generally you have the vibraphone, the xylophone, and the marimba. Sometimes in cartoons you’ll hear the sound of a skeleton crackling or something and that’s the xylophone which has really dense wood bars that give it a brittle sound. The vibraphone is used in jazz music and it has metal bars so it has a very mellow sound. If you’ve ever seen a jazz group play and there’s a mallet player, then that’ll have been the vibraphone. The marimba is kind of the sister to both of those instruments, it’s made of wood and it has a warmer tone. It is an instrument that isn’t as prolific in the orchestral repertoire so in order to pursue to play it you have to have a really high level of interest.

What was your musical training like?
I did my undergrad at Ohio State University, then my graduate degree at The Eastman School of Music and it was great to have both the state school education and the conservatory education. At Ohio, I had a lot of friends who weren’t in music and it helped my career today because I can connect with a lot of different people, at Eastman that was balanced with the really intense conservatory training where I didn't breathe for two years because I was studying music at a really high level. After grad school I moved to a small town in northern Sweden called Piteå, just south of the Arctic Circle because I felt like I wasn't done learning. I knew I was a strong technical player because of my conservatory background but when I graduated I had this existential question of like, "Why me? Who am I?" and all of these questions that I still hadn't answered and I didn't feel empowered to be a creative, I didn't understand what that meant yet, and so in speaking with mentors I met Anders Åstrand who is an improviser, freelancer musician, composer and at the time there was this opportunity that I could go and study in Sweden for free, take lessons with him, and explore!

You’ve said that doing your undergrad at Ohio State University gave you the opportunity to connect with all sorts of people not in music, do you think that set the foundation for your cross-disciplinary performances?
Yes! There was a seed planted in my undergraduate career via two outlets: first is that the assistant professor at the school, Joseph Krieger, was also on faculty at the dance school so I played West African music and contemporary hand drum improvisations for dancers which created a connection between movement and music at a very early time in my playing.

Do you think that influenced you at all in your approach to percussion?
Oh absolutely, percussion is all about gesture. When I strike a drum, I am physically moving my body in a way that is telling you how the sound should feel. If I smack something sharply, you might think of something very loud or very articulate or something short, but if I make a very flowy, more languid gesture, you might hear something that’s longer or softer and so my gesture is very much affiliated with the sound I'm making. When you see the physicality of the percussionist playing and you match that with the physicality of the dancer moving, there’s a new awareness of the body. Part of my mission as a musician is to get music outside of institution walls, to figure out who am I playing for. I’m not playing for other musicians, I love other musicians, of course, but it’s a very limited pool and it’s not making an impact on our society—it’s not growing relationships. I want to create moments of discovery with my neighbors. For me, the reason why I perform is to bring a whole bunch of people together to experience the same thing and then to think about it and talk about it and to just have a moment where you connected on a very human level. How can we create moments in which a large body of community members can come together and experience a unique thing?

Like with your work with Masary Studios?
Yeah, Masary Studios is my light, sound and performance collective in which our core is two percussionists/composers and also a projection artist/animator. All of our projects infuse live performance and visual arts. One of our biggest projects was when we turned the back wall of Fenway Park’s Green Monster into a percussion instrument. I mapped the space using traditional western classical notation and then we commissioned four other composers to write music for this structure. For instance: they knew that if they wrote an E on a certain line, that it would affiliate with the note from this specific beam. We performed for like 30,000 people with projection mapping and what I loved was that it was classical in the sense that we used scores by composers and we were creating intentional sounds, but it was also outdoor and people partying were so infatuated with the sounds that we were making. We were able to stretch them while also entertaining them! 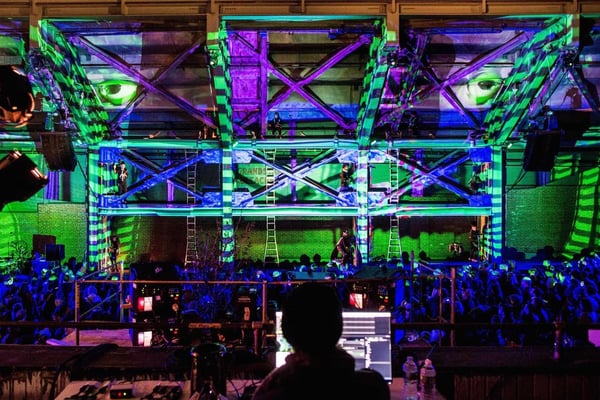 You’ve made a career collaborating with artists from all over the world specializing in so many different areas, how were you able to collaborate so effectively? What do you think are the top two factors that go into creating a successful product?
Having a really honest and thoughtful narrative. Every product or performance has a reason it’s behind made, it has some sort of idea that wants to be brought to the public; it is a reaction to something. For me, a successful performance has that baseline of an honest narrative behind it. There should be some sort of goal or reason that piece of art exists, which acts as a great unifier. Regardless of the process, which can be very bumpy, a successful performance will always have the foundation of a thoughtful and transparent narrative. The other is empowering your team and yourself to be their very best version of themselves. Work on strengthening your strengths instead of focusing on fixing your weaknesses. As a classical musician, this is very antithetical to your practice; but I would say lifting up your team and having an honest narrative are the two seeds to having a successful performance.

Speaking of performances, let’s talk a little bit about March Marimba Madness!
The show features three different projects, the first of which is Marimba Cabaret. Brian Calhoon and Greg Jukes take musical theater works, turn them upside down, and arrange them for marimba and voice. Brian sings while he plays (which is extremely difficult) and Greg accompanies him on marimba, drums, or vibraphone. The second project features Rolf Landberg who happens to be coming through town and he just released an album called #marimbagram. The idea is that he is going to perform pieces that are based on different moods or ideas. Then I’m going to perform my project called #improvadayLive and I’m really excited about it! A few years ago I started this instagram called #improvaday where I was challenging myself to find music wherever I was and to record a video of me playing something. This could be anything from this table right here, to a sign, to pots and pans! It was a great creative outlet and a festival in London contacted me about performing it live! I had about 100 posts at the time, so I pulled my 20 favorite videos and put them in tempo with one another, then layered them on top of one another, so all of the sudden I had this visual and audible backtrack!

The #improvaday videos I’ve seen are only a few seconds long, how do you create a full-length piece out of that?
Through looping I’ve created a few pieces that are about ten minutes long and I’ve layered some of the videos and created a mosaic of #improvaday as the backtrack. Then I’m adding the melodic material while I am accompanied by the videos! I’m super excited because I’ve only played the performance in London so this will be the North American premiere! 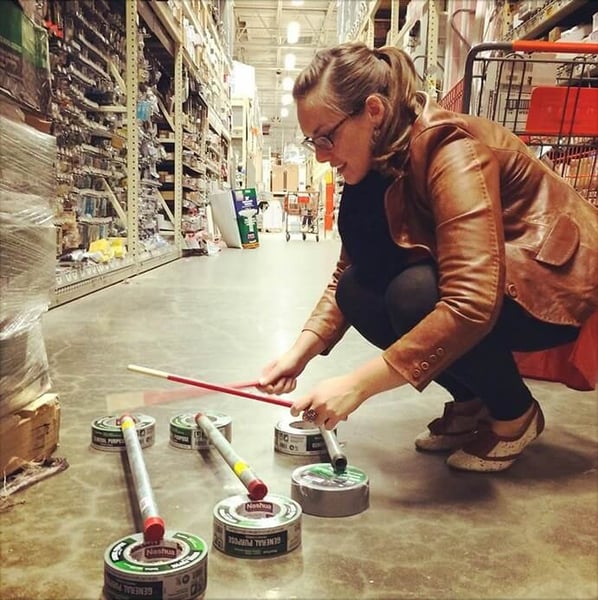