"Never look at the trombones; it only encourages them."

Trombone often gets a bad rap. Whether it’s thought of as the teacher’s voice in the old Charlie Brown cartoons or as the sad trombone sound effect, I think we can all agree that sometimes the trombone is seen as the instrumental buffoon. I, a trombonist, was once offered $200 to follow a fat guy around and mock him à la Family Guy. (Seriously, I went to Juilliard for this.) Unbeknownst to most people, composers revered the trombone, using it to depict solemnity, death, and the depths of Hell. Felix Mendelssohn is quoted with the saying, “The trombone is too sacred for frequent use.” and even Beethoven likened the trombone to the “Voice of God”. Maybe these guys were hacks, but history doesn’t seem to think so. 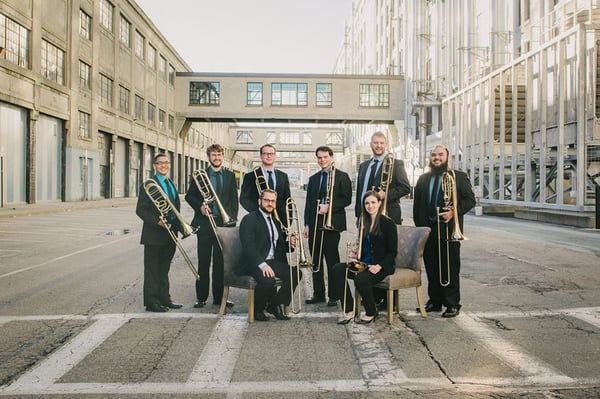 What makes trombone so special?

MT: To start with, what makes trombone so special is how versatile it is. You could hear it in all kinds of music; you can hear it in popular music, even in this Justin Timberlake song playing at this restaurant, I’m sure there’s trombone in it. You can hear it in jazz, but then you can also get a totally different character from it when you listen to movie soundtracks and then even yet another character when you listen to the great symphonies from the 19th century. There’s kind of this versatility to trombone that most instruments don’t have.

AK: I think for the most part when people think of trombone they think of a loud marching band sound and that is a very small percentage of what the sounds the trombone can make. There’s great variety to the trombone and often when I play for audiences generally people are just shocked at the sound you can make! They aren’t expecting such a warm, chorale kind of sound. It really mimics the human voice and in many ways it can be pretty life-changing for people to hear for the first time. It’s a very special sound to experience and I think that’s a big part of why it’s important for people to hear trombone in settings that are varied because it’s a lot like any other main mode of communication—there’s a lot of variety.

MT: Yeah, it has a huge spectrum of sound quality. I mean if you start with that brash marching band sound that Alex mentioned, it can go from there all of the way down to a very mellow, solemn feeling which is what a lot of earlier composers thought of when they wrote for trombone including Handel, Mozart, and Beethoven. They were all thinking of this really solemn sound that for them meant death a lot of time, not in the piercing, painful way as much as the really solemn and introspective way.

Fun Fact: The funeral of Beethoven featured a trombone quartet written by Beethoven himself. Drei Equali was written to depict sadness and sonorous grief and will be played on the program on Monday. 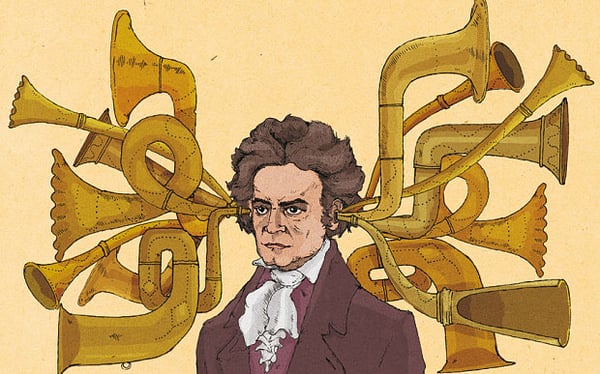 I'm sure there's a correlation between Beethoven's deafness and his love for trombone.
Illustration: Wesley Merritt

MT: I think that’s part of it. I think that because we’re able to get a whole spectrum of ranges it is very similar to a vocal choir. Mens choirs have always been a tradition, and the trombone choir is very similar because we both have a spectrum of bass to alto. Both trombone and mens choir lack the soprano voice but you’re still getting the alto voice which offers the pleasing melodic range and then you get the bass voice which a lot of other types of instruments can’t achieve as well as the trombone. Trombone also has a really mellow tone too which is very unique and is something that other instruments can’t get. As a result, you have this fantastic ability to blend and make chords.

What do you think makes trombone choir so popular for composers? You don’t really see trumpet choir or oboe choir, but there is a lot of literature for trombone choir and quartet. Do you think it’s because there’s an alto, tenor, and bass trombone similar to a vocal choir?

AK: I think it even goes further than that and to a really simple place and that is the idea of an instrumental choir coming from a vocal choir. What is very interesting about the trombone is that when you produce sound by buzzing your lips, that sound comes from two organs that are connected with air moving through them. If you turn your lips sideways it actually mimics the vocal cords and the sound production is very similar. I think for a large part because of this similarity, the trombone can create a very vocal-like, singing sound that is louder, more resonant, and more powerful than the human voice. Coupled with the physical instrument which adds a special kind of bell-like color that you get from the brass, the result is a more powerful choir sound with more color in it. I think that’s why there’s something special about having many trombonists play together and you can see more of that variety on Monday.

How many types of trombones can the audience expect to see on Monday?

MT: Four! Starting from the biggest, the audience will see the bass trombone which has the biggest bell and it also has two valves on it. While the trombone is normally played with just the slide, we also can operate valves with our left hand, on the bass trombone you’ll see two valves which allows it to go very low. From there you’ll see the tenor trombone that has one valve on it and the bell will be slightly smaller, then you’ll see some tenor trombones that don’t have any valves and those are going to have slightly smaller bells. The smallest trombone you’ll see is the alto trombone and that’s going to be noticeably smaller because that’s the only trombone out of those four that actually plays at a higher pitch. It’s basic pitch is actually higher so the construction of the instrument is much smaller than the other three trombones. It looks like someone stuck a trombone in the dryer and it shrank! 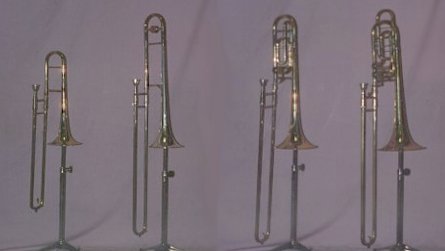 What else can the audience expect?