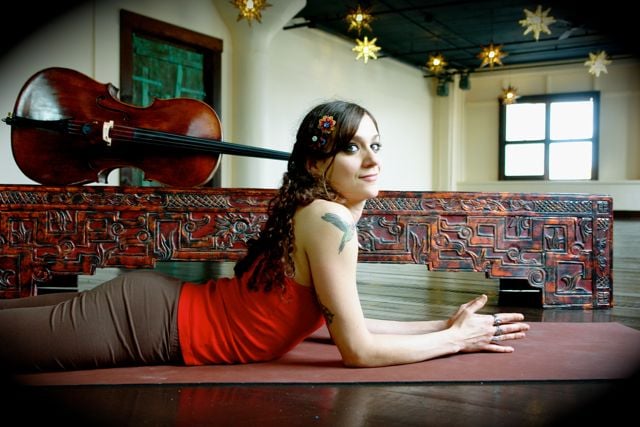 This week, Opus Affair caught up with cellist/aerialist/yogi extraordinaire Rachel Barringer. Originally from LA, Rachel moved to Boston to study cello at the Longy School of Music. Now, eleven years later, Rachel plays in the Sonic Liberation Players, a chamber orchestra specializes in 21st-century music; teaches aerials and flexibility at the Commonwealth Circus Center; and performs with the Boston Circus Guild. Rachel will be performing as part of the Boston Circus Guild with Symphony Nova on March 16 and will be teaching yoga at the Detox/Retox AcousticaElectronica Yoga Mashup on April 6 at OBERON.

Before yoga and aerials, was cello your first love? How do you get from cello to aerials?
Yeah, cello was the first thing I was really good at! I grew up in the LA area (Glendale, California) and played piano when I was really young, but I started playing cello in fourth grade and loved it! I ended up getting my undergraduate degree in music at California Institute for the Arts, and in 2006 I moved to Cambridge to study at Longy School of Music for my master’s degree. I tried yoga as a way to relieve performance anxiety while I was in college and really liked how I felt so I decided to see how far I could go with yoga. I started to focus more on the athletic side of yoga and build strength and loved it so much that I thought it could be cool to teach yoga. I was already teaching cello at the time and thought it wouldn’t be too difficult to teach yoga as a cute side-job, but then I ended up teaching more yoga than cello, and that was ten years ago!

Did you feel like your background in cello brought a different dimension to your yoga practice and teaching?
Yeah, people have definitely noticed that my routines are pretty creative. When I sequence things, I think a lot about what would work for me and what would work for most people. A lot of people ask me where I trained but I trained ten years ago and had many different teachers so I’m drawing from so many different sources of inspiration and the sequencing now is really my own thing. I don’t try to copy anyone.

Do you think part of it is that, as a former musician, you spent so much time practicing alone and interpreting music in your own way? That the same process and uniqueness comes out in your sequencing?
That’s really a great way to put it, I’ve never thought of it like that! The yoga I teach is my own version because I do a lot of strength and alignment work that builds a strong foundation to help me do more advanced things.

Was aerial performance the natural progression from yoga?
Not at all! I realized while teaching that a lot of the way yoga people teach handstands just isn’t enough so I took a hand-balancing class at Esh Circus Arts. While I was there I saw some aerial classes and decided they looked fun and I wanted to try them. I became obsessed pretty immediately, worked my butt off, and now I teach at the Commonwealth Circus Center!

I’ve been watching your videos online where you loop yourself playing cello and then start doing aerials while your cello loop is playing and you end up accompanying yourself. How does that work? Is the routine pre-conceived or it is all where the space takes you?
I plan it all! My husband and I have a band together called The Wrong Shapes and we use pedals to loop certain sounds and create different textures. I thought it would be interesting to see if it would be possible to have cello and aerials but of course there’s no way I’m going to take my cello up into the sky, so I figured that I could write a piece, loop it, and have my husband play guitar over it!

That’s really cool! On the subject of aerials accompanying music and visa-versa, let’s talk about the Boston Circus Guild with Symphony Nova event coming up on March 16.
Symphony Nova gave Clara LaFrance and I a list of pieces they were playing and we got to choose music that we wanted to do aerials to! I’m doing an aerial hoop act to the Villa-Lobos piece, Jet Whistle (which I’ve actually played on cello before). Clara is doing a trapeze act to the Schulhoff Concertino, and then we’re doing a silks duet to the second and third movements of the Ibert 3 Pieces Breves.

You mentioned that you've played the Villa-Lobos Jet Whistle before on cello but now you're getting a chance to accompany the piece with an aerial hoop act, do you think having such prior experience performing the piece has brought a new dimension to your aerial choreography? Do you hear the piece differently now than you did before choreographing the piece?
Yes! Having known the piece it helped sculpt how I choreographed it. Also after listening to it a zillion times I have gotten to know the flute part even better. There are sort of two modes/characters I am in—fluid/languid/lyrical and a little jagged/angular (mostly characterized by head movement and oscillating between flexed/pointed feet).

You’re also involved in the Detox/Retox Yoga Mashup event hosted by ToUch Events and Opus Affair?
Yeah! I’m going to put everyone in the mood for the show by teaching a simple hour-long yoga class and playing a little cello before the show! The whole show is very intriguing, there’s a lot to it and it’s going to be a lot of fun!

Busy tonight? Fear not! You can also catch Rachel at the Detox/Retox: the AcousticaElectronic Yoga Mashup on April 6!