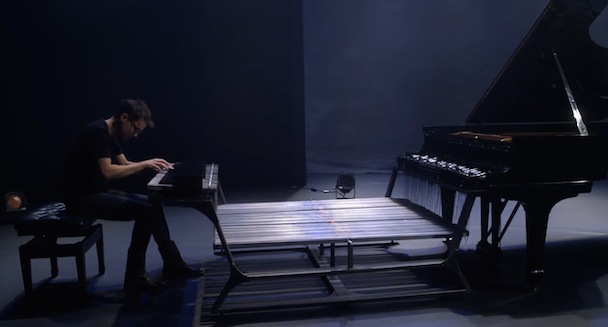 What if Beethoven wrote hip-hop? What if Debussy dabbled in electronic music? What does Stravinsky have in common with sampling? We’re living at a time musically when anything can happen. At the forefront of blending classical music with new technology is Ryan Lott, founder of the electronic band Son Lux and composer of yMusic’s newest album, First.

Ryan Lott grew up in Connecticut begrudgingly learning classical piano and sneaking off to hip-hop shows when he could. “I feel like I always had a yin and yang experience with music. I’ve always been able to rock out, and then I’ve always had to take piano lessons, too.” At 16, Lott heard Bartok’s Music for Strings, Percussion, and Celesta and realized that he couldn’t not compose music. With Bartok, he knew that he had found his calling.

Lott then moved to Indiana University to pursue composition where he also studied World Music and began collaborating with dancers, including his future wife, Jennifer. “I don’t know why, but dancers have always responded really well to my music, I think part of it is that I think rhythm and sound-color before melody and harmony.” From there, Lott and his wife moved to Cleveland and co-founded the Wake Arts Collective and then in 2008 Lott released the aptly-titled album At War with Walls & Mazes under the moniker Son Lux. In 2011, he released We Are Rising which was recorded in 28 days as part of the RPM Challenge. Soon after came Lanterns in 2013, Bones in 2015, and now Brighter Wounds in 2018.

So, what does an electronic/ hip-hop band have to do with classical music?

“When I first started out I was very poor and I was beginning with a lot of limitations. The answer to being successful wasn’t buying more sound equipment or the latest technology, it was learning to be resourceful with what I had. I didn’t have any budget but I had a library card and a stack of classical cds. I developed a very tedious process of listening for specific notes on recordings and figured out a way to arrange music from samples, but instead of just looking for old soul tracks, I was looking for chamber music. My ear was drawn to those textures and ideas, but my mind was in hip hop," he recalls. "So the way I assembled it and put it together is what I learned from hip hop, but I learned what to look for from growing up studying classical music." Son Lux’s foundation is built on classical music, Lott has built a career bridging the gap between the world of classical music and the pop world. Lott is subversively bringing Rachmaninoff and Stravinsky to the main stages of both concert halls and clubs. He’s embraced Beethoven as much as he’s embraced rap and technology and he has created a unique tapestry of sound. A self-described “collagist,” Lott is a prime example of what happens when worlds collide. 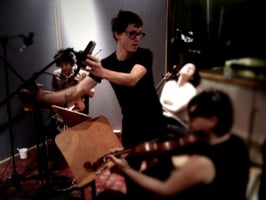 Through a process known as sampling, a technique of digitally encoding music or sound and reusing it as part of a composition or recording, Lott has created a “...patchwork of sound, a brand new marriage of rhythms and textures. …[Sampling] enables a theoretically infinite loop that is consistently perfect in that each repetition is identical and it really opens up the world of texture and timbre and in placing sound on the level of an instrument, it puts them on a higher plane. It is the sound itself which is a musical idea. You’re taking sounds from seemingly unrelated sources and creating a symbiosis and textural pathwork between the two.” For instance, in his single, Lost it to Trying, Lott created a high-pitched virtual instrument from a highly-manipulated Rachmaninoff sample. In taking classical music snippets, Lott has enabled himself to create an entirely new “world of sound’.

Lott has taken this “world of sound” and used it collaborations with everyone from Sufjan Stevens to the rapper to Serengeti to the avant-garde chamber ensemble, yMusic. Lott and yMusic recently collaborated on the album First and with the “repetitive structures and ominous background” Lott’s signature is all over the album.

In an interview with Interview Magazine, Lott says “I think the training I got in the classical tradition, and the bit I’ve had in jazz, “sophisticated, serious music,” brought a sort of open-mindedness to my music-making and to music absorption, the ability for your ear and your mind to accept things that are outside of the common experience and that kind of have a magic to them by virtue of their strangeness and their complexity. It’s just the big wide world of music, and I think that training in that tradition acquainted me with that region of that big beautiful world, and certainly gave me the discipline to do the tedious, geeky stuff that I do when I make music. I can sit down and play a guitar and sing a song, not really well, but I can do it. I spent most of my time on the other end of the spectrum, learning to execute and create music tediously.”

One of the most striking aspects of his Son Lux shows are how disciplined and well-timed they are. His training as a classical pianist and composer is evident in the precision he brings to the show. This world of sound that is so all-encompassing on the record is somehow brought to the stage with the help of his two other bandmates, Ian Chang on drums and Rafiq Bhatia on guitar. “Live shows are really difficult, a record vs live show are philosophically very different. They don’t always translate so well. With live shows, it requires reverse engineering, because you’re working backward from a sound project. But fortunately and unfortunately, that sound project was designed for the recorded medium...I have to create my own instruments for the show, thousands of hours of preparation are before every show.”