From its mysterious beginnings 20 some years ago, the SICPP music festival has been delighting, confusing, and enrapturing audiences in Boston. The Summer Institute for Contemporary Performance Practice (or “Sick Puppy,” as it’s known to regulars) started as an intensive performance seminar on the piano music of the 20th century. Over time, Sick Puppy expanded to invite musicians of all instruments, and started a composition fellowship and a workshop for electronic music. In its current form, Sick Puppy is a 9-day celebration of the very best of 20th- and 21st- century classical music. Beginning on Sunday, June 17th, faculty and guest artists perform free, nightly concerts in New England Conservatory’s Jordan Hall. 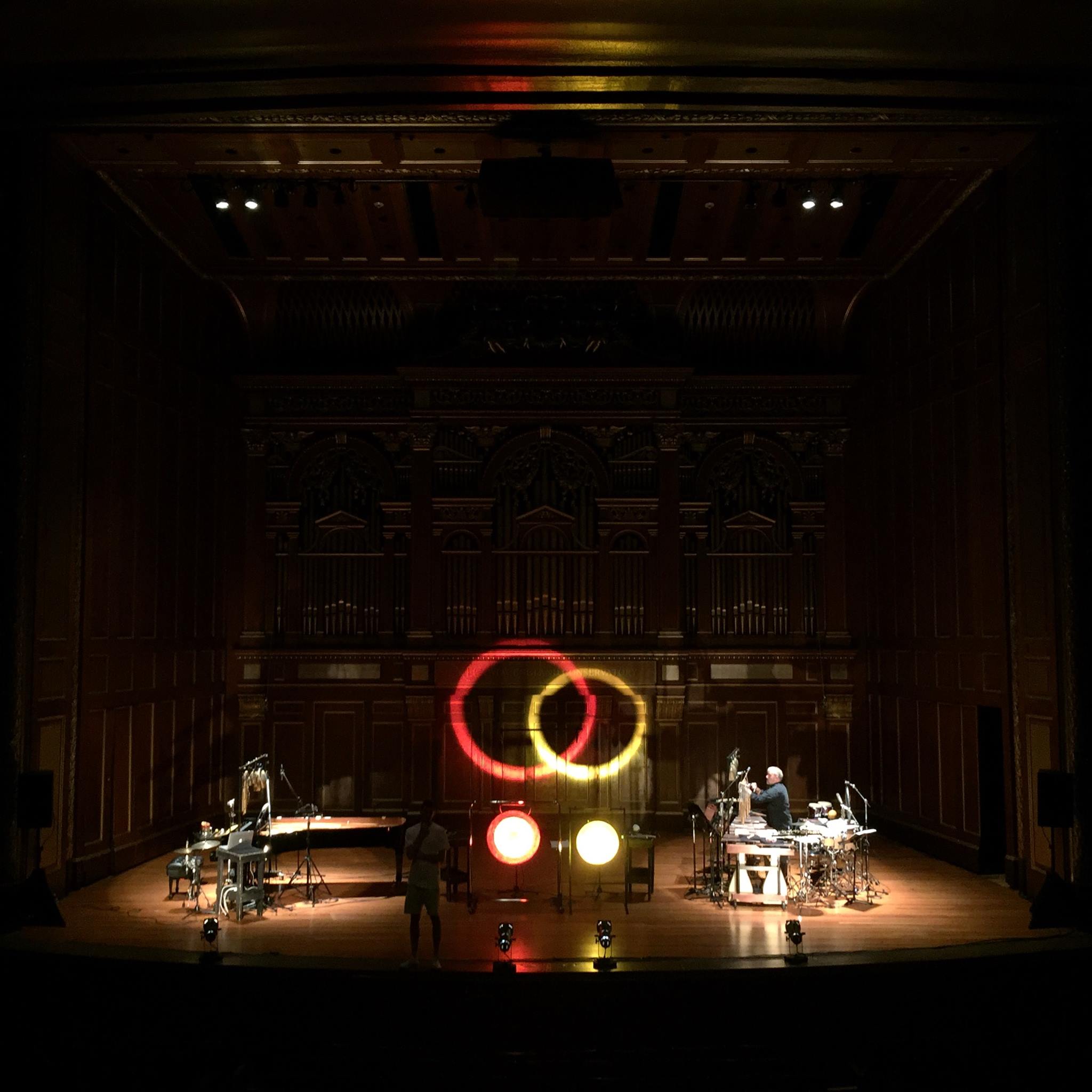 For audiences new to contemporary classical music, there are myriad ways to enjoy – it’s a kind of music which rewards curiosity and openness. Perhaps a trumpet melody entrances you, and then your attention is grabbed by a pianist who is standing up and strumming the strings of her instrument. Perhaps instead of listening to individual musicians, you sit back and let the rich ensemble sound crash around you in waves. Some contemporary classical music – such as The Fall of the Empire by Frederic Rzewski (performed Sunday night by guest artist Allen Otte) – is visceral, violent, and nearly uncomfortable at times, mirroring the deeply urgent politic nature of our current era. Other works – like Thomas Adès’ string quartet Arcadiana – has moments of rich, rhapsodic beauty which Beethoven himself would enjoy. The meaning of each sound can feel universal or deeply personal, it just requires an open mind and an open ear to appreciate it! 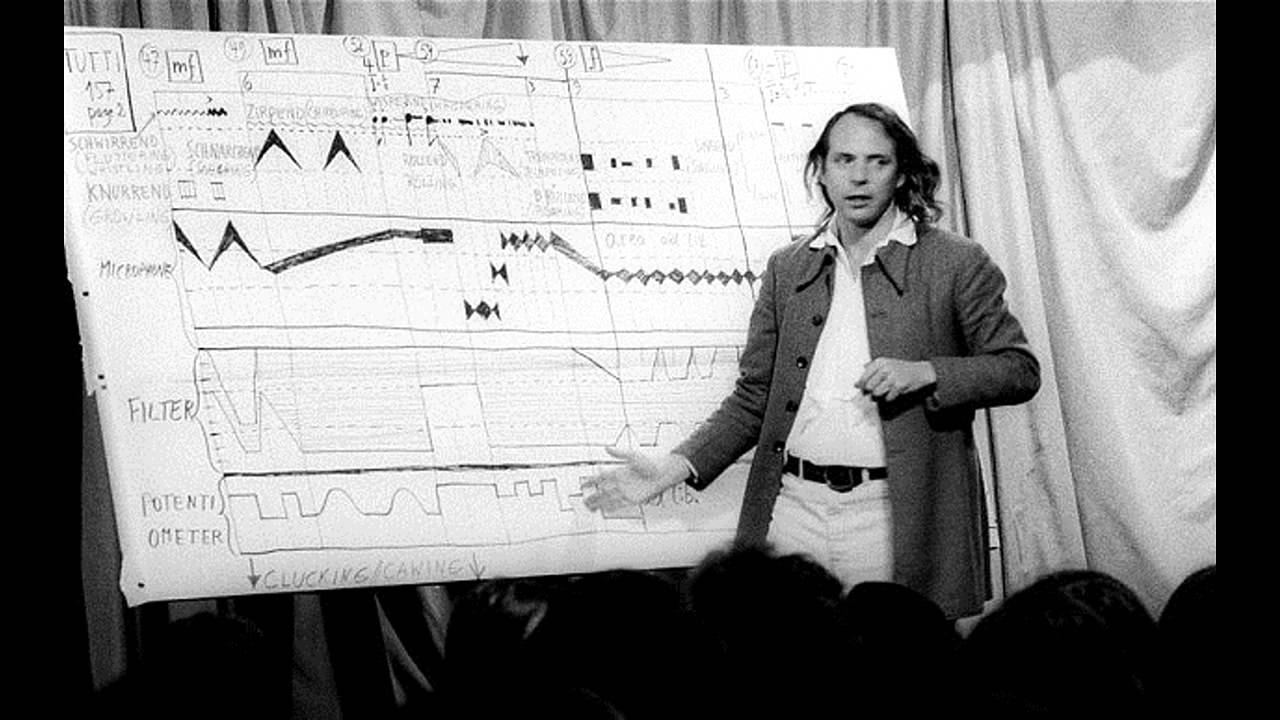 Karlheinz Stockhausen lecturing about his music

The evening concerts on Sunday (June 17) and Friday (June 22) highlight the faculty musicians as virtuoso soloists. Monday and Thursday evenings feature this year’s guest artists – percussionist Allen Otte and violinist Mark Menzies. Wednesday (June 20) and Thursday (June 21) highlight the work of our other guest, British composer Julian Anderson – we’ll be highlighting compositions from multiple periods of his life, including solos, chamber music, and electro-acoustic pieces for large ensemble. Throughout the week, ensemble-in-residence Callithumpian Consort will be performing in various configurations. Tuesday evening will be a highlight experience, a 1960’s era “happening” by Karlheinz Stockhausen that involves video, comedy, drama, and so much more; an evening which will expand your conception of what music is, and what it can mean to you!

One of the featured performers on Sunday night is Scott Deal; Scott teaches at IUPUI  (Indianapolis University-Purdue University Indianapolis) and as a musician he’s both a virtuoso percussionist and a talented electronic music. We asked him to share a few words about one of the pieces he’ll be performing this weekend: 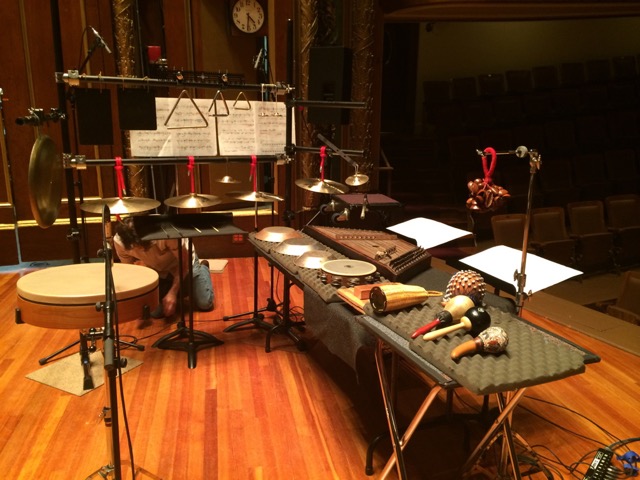 The percussion set-up for Husk. All of these instruments will be played by one person.

"On the Sunday, June 17th evening concert, I will perform Husk, with aura (2015), an electro-acoustic percussion work composed by John Mallia, my fellow faculty at SICPP. The piece was crafted over a year-long collaborative effort with John, who made several trips to my percussion and electronics studio in Indianapolis. Together, we explored the vast sound world of my percussion collection, finding instruments and sounds which appealed to and felt significant to both of us. Drawing upon poetry of Carolyn Kizer, the piece is a fascinating foray into death, reflection, resonance, and remembrance. In the piece, sentence fragments from Kizer’s poetry are realized through the sounding of a battery of metallic objects hanging around me. These sounds are then combined with subtle electronics to create a sonic body of sustained resonances which fills the performance space. Mallia’s chosen percussion sounds include ringing metal, a rigged dulcimer, rattles, and specific drums; the intermingling of these sounds creates a unique and exotic world that invites the listener to reflect upon their own spiritual experience. In 2017, I published Husk, with aura as part of a collection of electroacoustic music called The Percussion Computer Media Collection. While this piece has been performed throughout the country since its premiere, I am looking forward to bringing Husk, with aura back to Boston, where it received its first performance on the Jordan Hall stage as part of SICPP 2015." 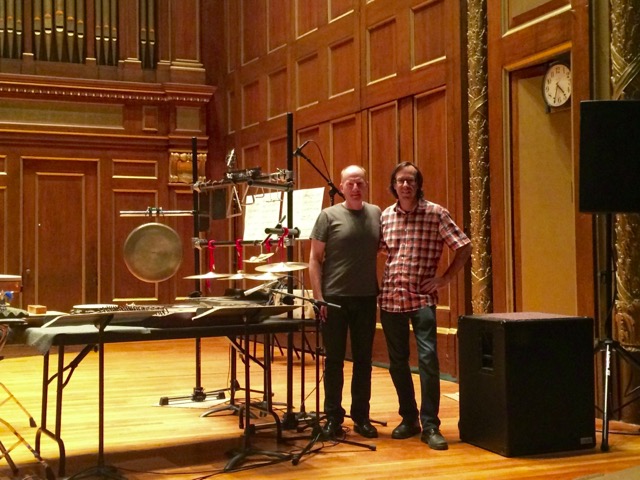 Boston’s very own Jennifer Ashe joins SICPP each year both to perform and to educate the next generation of vocalists to perform contemporary music. Jennifer’s vocal talents and artistic prowess seem almost effortless, but her performances are always fiery and fearless. On Thursday night, she will share two works by Guest Composer Julian Anderson:

"I’m honored to be singing two chamber pieces by Julian Anderson, guest composer in residence, on the Thursday, June 21st evening concert. This is my first time performing Anderson’s works, and I am really enjoying working on them. The vocal writing is very elegant and the works sit very well in my voice in terms of range and tessitura. Seadrift – composed in 1993 for soprano, flute, clarinet, and piano – is set to a text from Walt Whitman’s cycle Out of the Cradle Endlessly Rocking. Paul Driver (Sunday Times) describes it as having a “rhythmic bite, notable for an invigorating jazzy-cum-folkloristic instrumental interlude”. While working on it, I’m struck by the detailed use of dynamics and articulation required of the singer. Tombeau, for soprano, violin, ‘cello, and piano, was written in 2017, and was co-commissioned by the Callithumpian Consort (SICPP’s Ensemble-in-Residence). Written for the Debussy Festival in England, the text is a memorial sonnet by Stephane Mallarmé (a friend of Debussy and a poet set often by him) to honor Edgar Allen Poe. Anderson likens his treatment of the three instruments in the opening to one giant guitar. Also listen for the voice’s microtonal inflections, highlighting important words such as “L’Eternite” (eternity) and “calme bloc” (calm block), referring to Poe’s tomb – Mallarmé describes the tomb as a “bizarre meteorite,” “torn down to earth by some obscure disaster.” 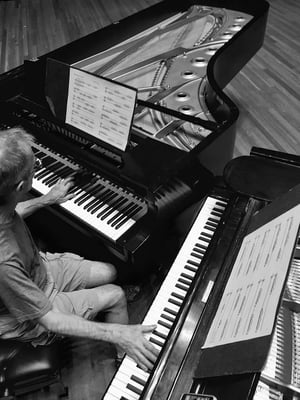 In addition to the evening concerts, our student-fellows perform lunchtime solo concerts and participate in an invigorating intensive of rehearsals and masterclasses. The week culminates in two concerts: The Electronics Workshop showcase concert on Friday afternoon, June 22nd, and the infamous marathon Iditarod (Get it? Puppies…Iditarod?) concert on Saturday, June 23rd. Last year’s Iditarod concert ran for 10 hours, but don’t worry – it’s broken up into 1-hour segments, and audiences are encouraged to come and go! If you attend Iditarod 2018, you can catch: 11 world premieres, a duet for baritone saxophone and bass clarinet, Steve Reich’s seminal minimalist work Piano Phase, and even a group piece for amplified toy pianos. To top it all off, every concert of SICPP is completely free and open to the public.